The 21 Irrefutable Laws of Leadership
by John C. Maxwell 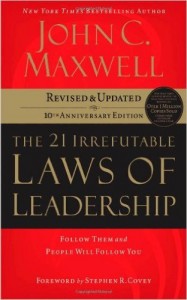 John C. Maxwell, the #1 New York Times bestselling author, coach, and speaker who has sold 25 million books, is called America’s #1 leadership authority. In 2014, Maxwell received the Mother Teresa Prize for Global Peace and Leadership from the Luminary Leadership Network, and was named the world’s most influential leadership expert by Inc. and Business Insider. His organizations—The John Maxwell Company, The John Maxwell Team, and EQUIP—have trained more than 5 million leaders in 188 countries. For more information visit JohnMaxwell.com.

1. THE LAW OF THE LID Leadership Ability Determines a Person’s Level of Effectiveness Brothers Dick and Maurice came as close as they could to living the American Dream—without making it. Instead a guy named Ray did it with the company they had founded. It happened because they didn’t know the Law of the Lid.

2. THE LAW OF INFLUENCE The True Measure of Leadership Is Influence—Nothing More, Nothing Less Abraham Lincoln started with the rank of captain, but by the time the war was over, he was a private. What happened? He was a casualty of the Law of Influence.

3. THE LAW OF PROCESS Leadership Develops Daily, Not in a Day Theodore Roosevelt helped create a world power, won a Nobel Peace Prize, and became president of the United States. But today you wouldn’t even know his name if he hadn’t known the Law of Process.

4. THE LAW OF NAVIGATION Anyone Can Steer the Ship, but It Takes a Leader to Chart the Course Using a fail-safe compass, Scott led his team of adventurers to the end of the earth—and to inglorious deaths. They would have lived if only he, their leader, had known the Law of Navigation.

5. THE LAW OF ADDITION Leaders Add Value by Serving Others What kind of a Fortune 500 CEO works on a folding table, answers his own phone, visits hourly employees as often as possible, and is criticized by Wall Street for being too good to his employees? The kind of leader who understands the Law of Addition.

6. THE LAW OF SOLID GROUND Trust Is the Foundation of Leadership If only Robert McNamara had known the Law of Solid Ground, the war in Vietnam—and everything that happened at home because of it—might have turned out differently.

7. THE LAW OF RESPECT People Naturally Follow Leaders Stronger Than Themselves The odds were stacked against her in just about every possible way, but thousands and thousands of people called her their leader. Why? Because they could not escape the power of the Law of Respect.

8. THE LAW OF INTUITION Leaders Evaluate Everything with a Leadership Bias How does Steve Jobs keep reinventing Apple Computer and taking it to the next level? The answer can be found in the Law of Intuition.

9. THE LAW OF MAGNETISM Who You Are Is Who You Attract How did the Confederate army—understaffed and underequipped—stand up so long to the powerful Union army? The Confederates had better generals. Why did they have better generals? The Law of Magnetism makes it clear.

10. THE LAW OF CONNECTION Leaders Touch a Heart Before They Ask for a Hand As the new leader, John knew that the most influential person in the organization could torpedo his leadership. So what did he do? He reached out using the Law of Connection.

11. THE LAW OF THE INNER CIRCLE A Leader’s Potential Is Determined by Those Closest to Him Lance Armstrong is hailed as the greatest cyclist who ever lived. People credit his toughness. They credit his brutal training. What they miss is the Law of the Inner Circle.

12. THE LAW OF EMPOWERMENT Only Secure Leaders Give Power to Others Henry Ford is considered an icon of American business for revolutionizing the automobile industry. So what caused him to stumble so badly that his son feared Ford Motor Company would go out of business? He was held captive by the Law of Empowerment.

13. THE LAW OF THE PICTURE People Do What People See Easy Company withstood the German advance at the Battle of the Bulge and dashed Hitler’s last hope for stopping the Allies’ advance. They were able to do it because their leaders embraced the Law of the Picture.

14. THE LAW OF BUY-IN People Buy into the Leader,Then the Vision They freed their nation by passively protesting, even when it cost them their lives by the thousands. What would inspire them to do such a thing? The Law of Buy-In. 15. THE LAW OF

15. THE LAW OF VICTORY Leaders Find a Way for the Team to Win What saved England from the Blitz, broke apartheid’s back in South Africa, and won the Chicago Bulls multiple world championships? In all three cases the answer is the same. Their leaders lived by the Law of Victory.

16. THE LAW OF THE BIG MO Momentum Is a Leader’s Best Friend The two-minute film was meant to show off the power of the company’s animation technology. What it did was engage the power of the Big Mo— leading to billions of dollars in revenue.

17. THE LAW OF PRIORITIES Leaders Understand That Activity Is Not Necessarily Accomplishment They called him the wizard. His priorities were so focused that if you give him a date and time, he can tell you exactly what drill his players were performing and why! It won him ten championships. What can the Law of Priorities do for you?

18. THE LAW OF SACRIFICE A Leader Must Give Up to Go Up What would you give up for the people who follow you? This leader gave his life. Why? Because he understood the power of the Law of Sacrifice.

19. THE LAW OF TIMING When to Lead Is As Important As What to Do and Where to Go Leaders at every level dropped the ball: the mayor, the governor, the cabinet secretary, and the president. Not one of them understood the potential devastation that can come when a leader violates the Law of Timing.

20. THE LAW OF EXPLOSIVE GROWTH To Add Growth, Lead Followers—To Multiply, Lead Leaders Is it possible to train more than a million people around the globe? It is if you use leader’s math. That’s the secret of the Law of Explosive Growth.

21. THE LAW OF LEGACY A Leader’s Lasting Value Is Measured by Succession What will people say at your funeral? The things they say tomorrow depend on how you live today using the Law of Legacy.