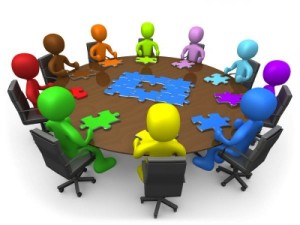 Here are some archetypal characters that you may find on your team.  They’re strong personality types that, ultimately, need to work collaboratively within the team to keep things moving along. Reacting to them intelligently makes all the difference.

THE BLOWHARD. She gets riled up. She makes exclamations. She blows off steam—not really complaints, just big, blustery energy. But like the complainer, she puts her head down and works when it comes down to it. The danger is that this high-energy spouting off might make others feel uncomfortable or taken aback or even attacked.

This person will probably always need to vent, but encouraging her to do it in a private, controlled environment is a good idea.

THE GEM. This person is exactly what you think: a fantastic colleague, great at her job, totally reliable. Thank your lucky stars if you get one or more than one of these on your team. Cherish her.

Hope for one of these on every team. Just be careful that she doesn’t slide into Hero territory.

THE COMPLAINER. He always gets the job done, but likes to complain about every little thing along the way. While complaints are sometimes valid, this person simply enjoys the act of complaining.

The best response is to just listen. After complaining, he will likely move on and get everything done. But, remember to truly listen—sometimes among the litany of his complaints will lie a real issue. Don’t let it pass you by.

THE HERO. This person is really good at a lot of things and has a tendency to swoop in, save the day, and fix all the problems that arise. This isn’t always a good thing.

Watch carefully—the Hero goes into fix-it mode when he senses a vacuum or gap. If he jumps into a task that isn’t his responsibility, question his reasons and make sure that it’s the best thing for the project to have him doing it. If so, communicate what he’s doing to the team so everyone knows. If not, encourage him to hand off the work to the right team member.

THE TIME BOMB. They have limits, and when those limits are reached, there’s a big reaction—as in, a slow buildup that leads to a meltdown.

Learn to read the cues. All time bombs will give cues, but they’re subtle.

THE WILD CARD. They’re unpredictable. If they have ten tasks to do, they’ll do eight with spot-on precision and the other two completely off base. And you’ll never know which two these will be. The danger is pretty clear: Something could go wrong, and it’s hard to know what it will be.

Keep a close eye on their daily statuses and have frequent check-in conversations; there’ll probably be cues for you to read.

THE LONER. This person wants to do everything alone. That’s not to say he’s hard to work with, he’s just not a natural group person. Some loners just don’t think well “in public.” They need to be alone to process their thoughts.

Respect that, but don’t let them do too much on their own or they risk getting out of sync with the rest of the group.