Dynamic creative optimization is a relatively new technology to the online advertising space, but it is sure to see tremendous growth this year.  Why?  Because dynamic creative optimization allows marketers to put the right message in front of the right consumer.  It allows them to differentiate and custom-tailor ad creative to people using data, and it is extremely effective at increasing a campaign’s performance, almost to the point of suspicion.  Many case studies show an increase to CTR well above 100% vs. non-personalized creative, and decreases in cost metrics of 60 – 70%.  Combine these two metrics and the impact to ROI is usually eye-popping.

As we’ve written before, thanks to data marketplaces and real-time bidding through ad exchanges, marketers now have very powerful tools to reach a very precise audience on the web thanks to an explosion in consumer data.  Literally hundreds of companies are in the business of qualifying people into anonymous buying segments and reselling that intent data to marketers, who then use it to target those users with ads across the web.  So technology has allowed marketers to reach the right person at the right time with fairly impressive scale and pricing efficiency.  Powerful stuff to be sure, but what about the right message?  For example, if you knew about a single, 25 year old male in California who was in the market to buy a car, the last thing you want to show him is an ad for a minivan that performs well in the snow.  He’s probably much more interested in a hybrid car that can store a surfboard on its roof.  That’s a comically extreme example, but the point is that regardless of the targeting, marketers still need compelling creative. And dynamic creative optimization is where data meets the creative message.  It’s difficult to understate how exciting this technology is – placing the right ad in front of the right person and the right time is practically a holy grail for marketers and it looks as though the online advertising industry has figured out how to do it, or at least invented the tools to do it.

So how does DCO actually work?  From an technology standpoint, DCO companies allow marketers to break an ad apart into individual pieces, and create different versions of those pieces for different audiences.  Each ad uses a template of one to four dynamic elements, and can rotate in different versions of each element.  For example, take the examples below, both from the Google-owned Teracent.  In both cases the top versions ads were not optimized with data, while the lower versions were. I’ve put the likely configuration of the ad template below the optimized versions of the ads. 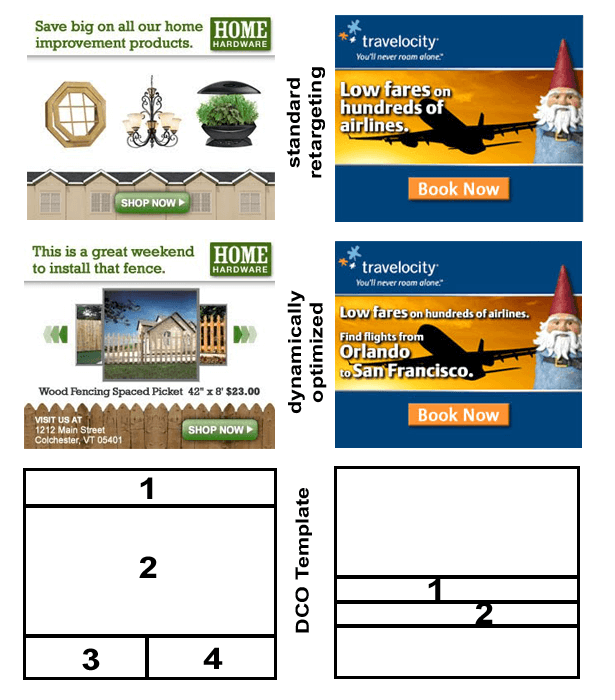 You can see that the lower ads have much more specific messages.  The Travelocity ad might use geographic data on a user to determine which city names to mention.  They could even have prior flight history data from that user to mention the exact route the user has taken before.  As you can see from the template at the bottom, Travelocity could feasibly rotate any combination of cities or destinations based on user data.  By feeding data from a Demand Side Platform (DSP) or Data Management Platform (DMP), there could be thousands of possible combinations.  That’s the beauty of DCO and layering data right into the ad – it allows the marketer to create thousands of ads on the fly, without actually having their creative department create every combination or the Ad Operations department flight every combination.

The Home Hardware ad goes even further, taking the user’s IP address to determine the nearest store.  This ad is clearly tailored to someone with intent because all of the products and even the ad copy is around fencing, specifically.  This could be a user who browsed fencing products but never bought, and the ad is looking to drive a sale to the local store.  In this case the customization is more complex than the Travelocity ad because it deals with four dynamic elements rather than two.  The marketer might feature images around any specific product, or even multiple products depending on the user.  They might even decide within a product to feature more premium items for more affluent users, or feature images tailored to warmer or colder climates to match the user’s own environment.  Anything is possible.

As far as the templates are concerned, you can see they are quite basic and allow for a good deal of experimentation.  Most creative vendors allow up to five dynamic elements on a given template, and then usually have a limit for how many iterations of each element, though usually it doesn’t matter if the element is text and coming from a data feed, as is likely the case for the Travelocity example.

From an operations perspective, DCO is fairly easy to integrate because the DCO vendor simply acts like a 3rd party redirect, although you may need to do some work to figure out how to pass the right targeting variables down to the DCO server.  All the heavy lifting to determine which target values (for example, which publisher the ad call is on, what country the IP address is assigned, what the ad size is, etc) to the user are still done in the ad server, but since the DCO is serving the creative, you need a way to pass those target variables to the DCO system, so it can compile the correct version of the ad.  In an exchange-buy, the DSP does the work by appending some data segments to each ad call.  It could be a code for which products the user has viewed on site before (fencing in the example above), what the user’s household income is, what the current season is, or one of thousands of other factors the marketer may know about that user.  Usually the pass-through of this data is done via a query string and straightforward to implement.

If you look at the previous post on Diagramming the SSP, DSP, and RTB Redirect Path, in Step 11, when the user calls the DSP’s server to request an ad, the DSP would append various segment variables to that ad call via a query string, so the marketer’s ad server can determine which ad to show.  In this case, the marketer’s ad server would redirect the user to the DCO’s server, reference a specific ad or continue to pass the segment variables from the DSP, and call the right version of the ad based on the data from that user.  In the diagram, there would be one more loop after the call to the Marketer’s ad server (steps 13 / 14).

DCO is used primarily by marketers, but there are some publishers using the technology to power editorial elements of their sites, or for their own traffic-driving or acquisition efforts.  If you are considering exploring this area, some well known Dynamic Creative platforms are Tumri, Teracent (now owned by Google), Dapper (now owned by Yahoo!), Adacado, Adroit, and AdReady, but there are many others out there.